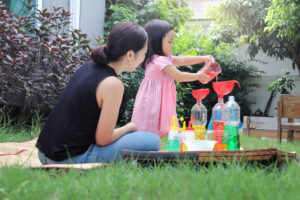 Science is like magic – it has the ability to captivate children and adults in equal measure. But did you know that the ingredients to a great science experiment can be found in your very own pantry?

SNOWSTORM IN A JAR

We don’t typically see much snow here in South-East Queensland, but with this experiment, you will! All you’ll need is a mason jar, some baby oil, iridescent glitter, white paint and some alka-seltzer (which you can find at larger grocery stores). The fizzy alka-seltzer makes the glitter move around the jar, like your very own snow globe!

Who knew a simple lemon could be the key to a great science experiment? Using lemon, lemon juice, baking soda, an ice cream stick and a tray or dish – plus some food colouring and dishwashing detergent, if you’re feeling crazy – you can make a fizzy citrus volcano in minutes.

It turns out rice is good for more than quick, delicious dinners and fixing our water-logged phones – it’s also the main ingredient for this cool science experiment! Take some white vinegar, baking soda, instant rice, a clear jar, water and food colouring (optional, but more fun) and combine them to create lava lamp-like ‘dancing’ rice.

This might be the easiest kitchen science experiment on this list – all you need is full cream milk, food colouring, dishwashing detergent, cotton swabs and a baking tray. Simply pour the milk into the baking tray, add a few drops of food colouring and gently touch your detergent-soaked cotton swab to the surface of the milk. The result will amaze you.

If Magic Milk is the easiest experiment on this list, this one is definitely runner up. All you need is some paper towel, food colouring in a variety of colours and a drinking glass (with a small amount of water) for each colour of food colouring. Drop some food colouring into the glasses of water (which should be in a circle), stand the rolled-up paper towel inside the glass (so each piece is touching the paper towel next to it) and watch the water ‘walk’ its way up. But the longer you wait, the more magic happens…

Take a tour of a centre near you