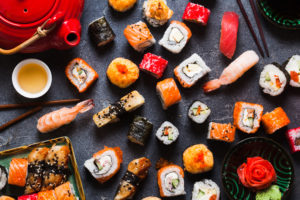 Today is June 18 which means it’s World Sushi Day! So, we thought it’s only natural that we chat all about this beloved snack. It’s favoured for its versatility and tastiness, but did you know that there are also a tonne of health benefits to eating sushi regularly? Not that we need any more convincing…

Sashimi, nigiri, temaki, uramaki… there are so many options when it comes to sushi. With sushi restaurants – particularly sushi trains – found in just about every corner of the globe, it’s no surprise that an international day was created to celebrate the delicacy.

A staple of Japanese culture and cuisine, sushi actually has origins in China. Apparently, it was first developed in Southeast Asia but was introduced to Japan around the 8th century. Originally, fish would be salted and wrapped in fermented rice for preservation, then left for weeks or even months at a time! The rice, which was really only there for preservation, would be discarded and the fish eaten as a valuable source of protein.

Over 1000 years later, in the early 1800’s, a Japanese cook called Hanaya Yohei created what we today would recognise as sushi. The bite-sized pieces of rice and fish could be eaten with chopsticks or fingers, and were allegedly designed to be eaten in public or the theatre – the original fast-food!

These days, sushi is one of the most popular foods in the world – whether it’s being eaten in a restaurant, as a takeaway, made at home or packed in a lunchbox. And no wonder… along with being delicious, sushi is actually surprisingly nutritious, too!

Apparently, the high levels of iodine present in sushi mean that eating it can help to prevent hypothyroidism and the low levels of oil mean it is relatively good for weight loss. It’s also meant to be a good source of antioxidants as well as omega 3, protein and calcium when made with fish. We’re sold!

Have you tried making sushi before? Check out these tips for making it at home:

Take a tour of a centre near you